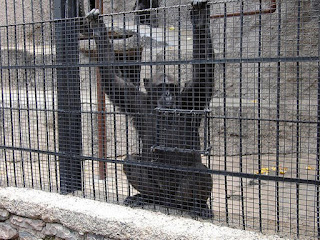 ‘We may judge the heart of a man by his treatment of animals,’ says Judge Mauricio quoting the words of philosopher Emmanuel Kant
Cecilia the chimpanzee will be transferred to the Great Ape Project’s sanctuary in Brazil Mario Gonzalez/Flickr
A judge in Argentina has ruled that a chimpanzee which spent years living in a secluded cage has legal rights and should be released from the zoo it was being held in.
The Association of Professional Lawyers for Animal Rights(AFADA) filed the case of Cecilia the chimpanzee to the court in Mendoza, arguing her confinement without companionship was “unlawful” and had a detrimental impact on her health.
Judge María Alejandra Mauricio decided Cecilia should be released from Mendoza Zoo, infamous for the death of the “world’s saddest polar bear” in poor conditions in July this year, and transferred to the Great Ape Project’s sanctuary in Brazil.
“We’re not talking about civil rights enshrined in the Civil Code,” she told the newspaper Los Andes. “We’re talking about the species’ own rights: development and life in their natural habitat.”
She told the court there was “no procedural route” to follow in this case, and agreed to pass Cecilia’s care over to AFADA.
In her closing statement, Judge Mauricio quoted the words of philosopher Emmanuel Kant: “We may judge the heart of a man by his treatment of animals.”
AFADA director Pedro Terrados Pozas in a statement said: “This is a landmark judgment, in which a judge has accepted for the first time in world judicial history a habeas corpus sentencing immediate transfer to our sanctuary in Brazil and with arguments supporting our struggle to consider the rights of apes.”
“They are not human and should have specific laws to protect them and provide them with basic rights.”
Mendoza Zoo faced international criticism after photographs of Arturo, described as “the world’s saddest polar bear” went viral – showing him suffer alone in poor conditions.
A petition in 2014 to relocate Arturo to Canada to escape South America heat and to interact with other bears drew more than half a million signatures, including the name of former house speaker Newt Gingrich and singer Cher.
However the bear died aged 30 during the summer, before campaigners were able to transfer him to another holding point.
From the desk of:Animal Rights Association of Nigeria-07040303030
http://www.independent.co.uk/news/world/americas/argentina-judge-says-chimpanzee-poor-conditions-has-rights-and-should-be-freed-from-zoo-a7402606.html