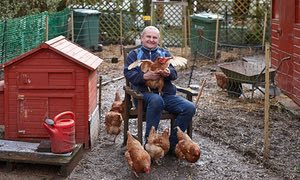 I thought, if they can cope with the trauma they have experienced, then I’ve got to find the strength myself

‘Bizarrely, one day, a friend asked if I’d ever thought about adopting ex-battery hens.’
overdose at 11, my second at 18 and my third just after my 21st birthday. It was a cry for help. I had lovely parents, but I was desperately unhappy.
I was sexually abused at the age of eight, in the 1960s. I was afraid I’d get the cane if I told a teacher, so I didn’t tell anyone. When my parents found out, all hell broke loose. The abuser went to jail, but I never spoke about it. I couldn’t face it.
I left school at 15 and worked for Royal Mail, first as a telegram boy and then as a postman. We’d finish at 12.30pm and go straight down the boozer. I’d have three or four pints, five, sometimes. Alcohol masked my depression, and by my early 30s I had become dependent. If I got bladdered, I could kick the demons out. One Christmas, I drank 48 cans of Carling in two days. I ended up in hospital. The doctor said, “You either pack in the drinking or you’ll die.”
That’s when, aged 34, I went to rehab and there followed six years without a drink. I lost six stone in weight and started cycling 15 miles to work and back. I’d never felt so fit.
Then, in 1997, I fell in love. It was a beautiful sunny day, we’d been to the Cotswolds and I had a beer. One became two, two became three… It was the ladder to oblivion.
In 2006, nine years later, I had a full psychotic breakdown. I was out with my dad and he said, “You don’t look well, son.” I remember feeling nauseous, my whole body trembling. Next thing I knew, I woke up in a psychiatric unit. I spent two months in hospital, then had treatment with support in the community.
I retired from Royal Mail on medical grounds, after 33 years, and filled my time volunteering for various charities. Then, in 2011, I suffered PTSD after I was beaten up in broad daylight. It was an unprovoked attack and I became paranoid, couldn’t sleep and began to self-harm – it was a way of coping.
I became a virtual recluse, and would let only a handful of trusted people into my home. Then, bizarrely, one day, a friend asked if I’d ever thought about adopting ex-battery hens. I looked at him as if he was stupid. He said, “They have a horrendous life, and you’ve suffered a horrible life.” He thought I would benefit from looking after them.
I had always felt good around animals, and I’ve got a huge garden, so I contacted the local rescue centre and went down for a look. It was like something from a horror story. The hens were in such a state: they had no feathers and the bottom of their beaks had been cut off. It shocked me to tears.
I took in four hens to start with, and they changed my life. I quickly realised that these hens depended on me, and that gave me a purpose. I thought, if they can cope with the trauma they have experienced, then I’ve got to find the strength myself.
They were terrified at first, but the first time they ran out of that coop, flapping their wings, was one of the most pleasurable moments of my life. I’ve now got three coops, a 12ft run, a brand new fence, 13 hens – and counting. I’ve got space for 30. I have spent a fortune on lettuce, porridge and corn on the cob. Live meal worms cost £11 a kilo, but they love them. I’ve probably spent about £3,500 so far, but the joy the hens give me is immense. They jump on my trousers, sit on my shoulders, they make me smile. I hadn’t properly smiled in 40 years. Even my psychiatrist said, “Paul, this is the best I’ve seen you.”
I’d never spoken about the abuse, locking it away in the back of my mind, but one day last August I broke down and told my psychiatrist everything. The hens had made me feel I could be more open. When I heard them clucking, I thought, if they can still speak after what they’ve been through, so can I.
One of the most crippling aspects of mental health is the desperate loneliness and discrimination from some members of society. The hens accept me. They calm me down and I feel that, through the horrors in both their lives and mine, we connect. As ridiculous as it sounds, they give me what I need.
https://www.theguardian.com

CONFUSION IN THE SENATE AS TWO STATEMENTS EMERGED WELCOMING PMB