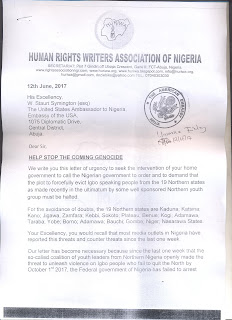 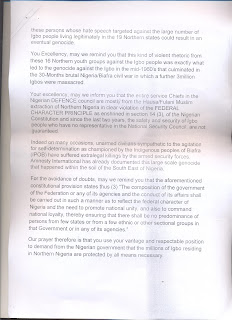 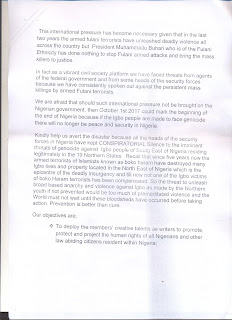 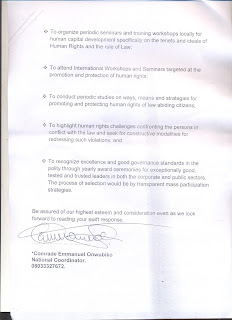 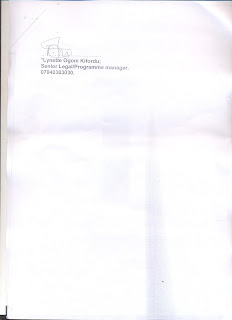 A pro-democracy and Civil rights body- HUMAN RIGHTS WRITERS ASSOCIATION OF NIGERIA  (HURIWA) has approached President Donald Trump of the United States; British Premier Theresa May; German Chancellor Angela Merkel and Russian President Mr. Putin to demand their action to stop the expulsion of Igbo people living in Northern Nigeria by October 1st
In the letter endorsed by Comrade Emmanuel Onwubiko the National Coordinator and the Senior Programme Manager Barrister Lynette Ogom Kifordu, HURIWA said the thteat by Arewa youth to use force to compel the exit of Igbo families in the Northern could snowball into genocide just as the group expressed the suspicion that those who command and control the Armed forces are mostly Moslem Northerners who have surreptitiously given their backing to the Northern youth hence they are moving freely even after issuing the hate speeches.
HURIWA wrote thus:  “write you this letter of urgency to seek the intervention of your home government to call the Nigerian government to order and to demand that the plot to forcefully evict Igbo speaking people from the 19 Northern states as made recently in the ultimatum by some well sponsored Northern youth group must be halted.”
“Most media outlets in Nigeria have reported this threats and counter threats since the last 48 hours. “
“Our letter has become necessary because since the last 48 hours that a group of youth leaders from Northern Nigeria openly made the threat to unleash violence on Igbo people who fail to quit the North by October 1st 2017, the Federal government of Nigeria has failed to arrest these persons whose hate speech targeted against the large number of Igbo people living legitimately in the 19 Northern states could result in an eventual genocide”.
“You Excellency, may we remind you that this kind of violent rhetoric from these 16 Northern youth groups against the Igbo people was exactly what led to the genocide against the Igbo in the mid-1960’s that culminated in the 30-Months brutal Nigeria/Biafra civil war in which a further 3million Igbos were massacred.”
“Your excellency, may we inform you that the entire service Chiefs in the Nigeria DEFENCE council are mostly from the Hausa/Fulani Muslims of Northern Nigeria in clear violation of the FEDERAL CHARACTER PRINCIPLE as enshrined in section 14 (3), of the Nigerian Constitution and since the last two years, the safety and security of Igbo people who have no representative in the National Security Council, are not guaranteed.”
“For the avoidance of doubts, may we remind you that the aforementioned constitutional provision states thus (3) “The composition of the government of the Federation or any of its agencies and the conduct of its affairs shall be carried out in such a manner as to reflect the federal character of Nigeria and the need to promote national unity, and also to command national loyalty, thereby ensuring that there shall be no predominance of persons from few states or from a few ethnic or other sectional groups in that Government or in any of its agencies.”
“Our prayer therefore is that you use your vantage and respectable position to demand from the Nigerian government that the millions of Igbo residing in Northern Nigeria are protected by all means necessary.”
“This international pressure has become necessary given that in the last two years the armed fulani terrorists have unleashed deadly violence all across the country but  President Muhammadu Buhari who is of the Fulani Ethnicity has done nothing to stop Fulani armed attacks and bring the mass killers to justice.”
“We are afraid that should such international pressure not be brought on the Nigerian government, then October 1st 2017 could mark the beginning of the end of Nigeria because if the Igbo people are made to face genocide there will no longer be peace and security in Nigeria.  Kindly help us avert the catastrophe.”

A female corps member serving in delta state, declared missing by her family.