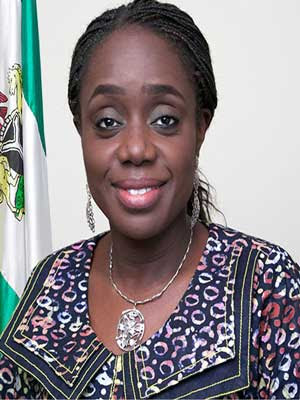 The whole of yesterday, I randomly read through a beautifully crafted and expertly compiled book titled:“Economics: making sense of the modern economy”, edited by Simon Cox.

I must confess that out of the over 10,000 copies of books of different genres and backgrounds i owned, this particular economics book is the most beautiful and colourful  book i have ever read in terms of graphics and typology. So you can now see why my interest in reading that copy was sustained.

A striking encounter i had was the fact that a portion of the 326 pages book reminds me of the controversy around the issues of alleged breach of the National procument law by the minister of finance Mrs. Kemi Adeosun in the procurement of some N17 Billion office equipment.

In writing about the concept of “the grabbing hand”, this book told me that some persons in the modern day government basically work daily  to economically empower their friends and associates in the elitist class.

The Writers affirmed as follows;  “a disinterested observer could describe only a small part of what governments do as even an attempt to improve overall welfare. Judging by their largest interventions (taxes and spending) governments are mainly concerned with redistribution: reducing one group’s welfare so as to improve another’s (some net cost overall)”.

In the case of Nigeria the ignominious role of government can be summed up as an organised chain of transactional business conducted in the name of public interest but which intrinsically is meant and tailored to benefit officials of the specific administration or ruling class alongside their friends in the so-called business community.

Now, this is how the above statement in that aforementioned book captures how the controversy over procurements of some office equipment without legitimate process represents the deprivation of millions of Nigerians of the essential services.

Recall that at the current market value and in view of the severe economic recession, the N17 Billion frittered on these so-called office equipment could have provided huge social services in the key areas of healthcare, education and small loans for small time businesses in the rural poor communities.

Added to the fact that most government offices in Abuja look like museums due to the large presence of non-serviceable facilities and equipment.

Take a walk around the Federal Secretariat complexes in the three arms zones, what will steer you in the eyes embarassingly are the total state of decay of toilet facilities and the entire lifts even as power supplies from the generators aren’t available because the generators or listers are all vandalised or in progressive state of deterioration and dysfunctionality.

So putting side by side the above observation of an absence of functional office facilities in most federal government offices in the nation’s capital whereby over 75 percent of the national government’s activities are conducted and then look at  the disclosure that N17 billion was paid out for equipment and then my encounter with the book, there’s no doubt in my mind that the culture of wastefulness and lack of accountability is very much with this government.

My reading of this chapter of this highly scholarly book revealed to me that our government basically don’t give a damn about the poor rather the officials enrich a few contractors whose stock in trade is to engage in some opaque transactions.

The import of this allegations of violations of a key pro-transparency and pro-accountability law- the Public procurement Act is that more Nigerians have become endangered giving that those critical social services being denied them have huge impacts.

The story is that the House of Representatives Committee on Public Procurement recently, summoned the Minister of Finance, Mrs Kemi Adeosun, over alleged payment of N17 billion for procurement of office equipment.

The three top government officials are to appear before the committee members.

Their invitation was sequel to their failure to appear at the public hearing on the allegation organized by the committee prior to the latest invitations.

The minister sent the Permanent Secretary in the ministry, Mr. Isa Dutse, to represent her, but the lawmakers rejected him and refused to accept any excuse for her absence at the investigative hearing.

Reports have it that prior to issuing the summons, Chairman of the committee, Oluwole Oke, said that the three officials had violated the provisions of section 15 of the Public Procurement Act 2007 as it pertained to the role of procurement entities.

The politician told the permanent secretary that the minister must provide documents that included the president’s approval for the contract, agreement signed by the contractors and record of payment of the contract by the ministry.

He said that the summons became necessary because there was a document from the Office of the Accountant-General of the Federation showing that they had paid N17 billion on the contract.

Oke added that public procurement regulation was the only way to curb corruption in the country.

Specifically, part three, section 15 of the public procurement Act 2007 stipulate as follows:(1) The provisions of the Act shall apply to all procurement of goods, works, and service carried out by: (a)     The Federal Government of Nigeria and all procurement entities;(b)     All entities outside the forgoing description which derive at least 35% of the fund appropriated or proposed to be appropriated for any type of procurement described in this Act from the Federation share of consolidated Revenue Fund. (2) The provisions of this Act shall not apply to the procurement of special goods, works and services involving national defense or national security unless the president’s express approval has been first sought and obtained.

This damaging allegations only goes to show the imperative of setting up the National Council on Public procurement in accordance with the relevant sections of the BPP Act of 2007.

Since inception the Bureau of public procurement has been administered in breach of these provisions even as the Federal Executive Council has become like a contracts’ awarding body in defiance of statutory provisions which mandates that a national council of Procurement be inaugurated.

President Muhammadu Buhari has for two years operated under the same opaque mechanisms of not setting up a viable council for the Bureau of public procurement which he inherited.

The officials of the BPP have been accused of running a scheme of under- the- table deals in clear breach of the relevant sections of the Procurement law hiding under certain provisions that guarantee exemption from competitive biddings particularly when procurement of national defence equipment are involved but the law specifies the steps to be adopted one of which includes a clear Presidential written approval.

It is the abuse of this exemption clause that the management of BPP hides under to perpetrate illegality in connivance with the finance ministry officials and procurement directorate of virtually all the government agencies.

These bureaucrats have perfected ways and means of manipulation of this lacuna of deliberate non  -inauguration of a national council of public procurement and the provisions for exemption certificate to be granted to commit bureaucratic corruption.

The cartels of this procurement thefts have  been so well organised in such a way that virtually most people who should have provided oversight functions are settled to remain silent.

Who are these bureaucrats and why are they so powerful in such a way as to wilfully violate extant procurement law?

According to the authors of concise oxford English Dictionary, bureaucracy means “a system of government in which most decisions are taken by State officials rather than by elected representatives”.

On the alternative, it is a system where officialdom dominates and is complicated in nature.

On the other hand, The New Webster’s see bureaucracy as representing the government and its  officials particularly those who are not elected and who see to the daily administration  of all government departments be it judicial, legislative or executive.

Mr. Ben Igwenyi an academic and an author said It may thereby be convenient to say that the word bureaucracy is synonymous with the public service of a state or country as the case may be.

“In that case, we may posit that both those elected and or appointed into government form part of the bureaucracy of a country or state, as the case may be”, he stated.

I think what the Legislature has set out to find out is the extent of economic and bureaucratic corruption that signposted the payment of this huge amount of N17 billion for office equipment without following due process.

When i say the above,  I’m assuming without conceding that they are altruistic and patriotic in their quest.

On the cintrary, evidence abound to show that most of these public probes in the Legislature are capitalised upon to negotiate huge payouts and settlements.

Not long ago the then chief Executive officer of Stock exchange commission accused a chairman of a committee in the House of Representatives of blackmailing her with threats of a public investigation if she failed to settle.

Anyway let’s proceed to look at what economic corruption implies and then attempt to situate it with the investigation of the current minister of finance Kemi Adeosun on the claims that her office committed grave crime against the Public procurement Act.

We will revisit the explanation of the academic and author earlier mentioned- Mr. Igwenyi.

Igwenyi sees economic corruption as being concerned with those unethical and unlawful acts of persons or institutions which adversely affect the production and consumption of services and of course the supply of money in a country.

When this is not checked, according to him, the entire economic system is disoriented to the advantage of few individuals who are engaged in the practice while the country and the ordinary citizens are made to be at the losing end.

He further submitted that in this category are exemptions from regulations which cause financial losses to the treasury of the State and of course payment of money for what ought to be obtained without such payments.

Nigerians should demand consistent open and transparent investigation of the Finance minister to ascertain the whole truth.

The finance minister should be made to publicly disclose the whereabouts of these office equipment so the house can use the services of forensic auditors to carry out forensic verification of the costs.

A man in Anambra state today, stabbed his father to death over land