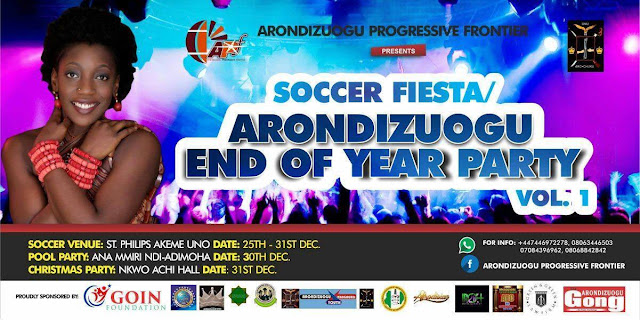 Arondizuogu (UMU CHUKWU)  who’s  ancestral  town is AROCHUKWU.  Is a peaceful village in Ideato north LGA  in IMO state. The village is organizing a wonderful end of the year party which is open for the Aro’s and non Aro.

According to the organizers , the party will include  river swimming  , soccer fiesta, prayer session  , and many more. The aim is to bring unity , rehabilitate the village and to teach cultural values to their children .

According to report , The named village is suffering from a terrible bad road, which a source opened up that the bad road has been eating up the fun of the village for more than fifteen years and the government has refused to come to their aid. The same source still said that the villagers have over the years lost the hope of power supply.

The federal and state government should please do the right thing.

ARONDIZUOGU is wishing Nigerians merry Christmas and safe journey to their various destination.