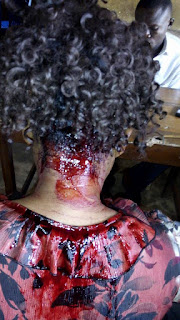 A widow left with four children in the early 90s was today at the early hour of 7.05  dated 17th Nov 2016  . stabbed over a land dispute,
The widow mrs okebugwu   was weeding her compound which she has been leaving with her dead husband  till the incident  , when a woman named mrs matha nwosu came out and told her to stop weeding the compound that it does not belong to her., as a peaceful widow, she called the elders and complained to them, the elders called the both and settle the issues.
Few hours later, the widow went back to sweep , as she bend down to sweep , the same woman came out and stab her with a chisel.
According  to her daughter, who reported the incident , miss Jennifer okebugwu , the bleeding was so heavy that she has to rush her poor mother to the hospital, the woman is still in the hospital receiving blood because of the pounds of blood she lost ,   now she is calling the Human rights commission and the general public to see that her mother receives the justice she deserve.

THE KIDNAPPERS THAT KIDNAPPED OUR PRIEST AND KILLED HIM HAD BEEN CAUGHT.